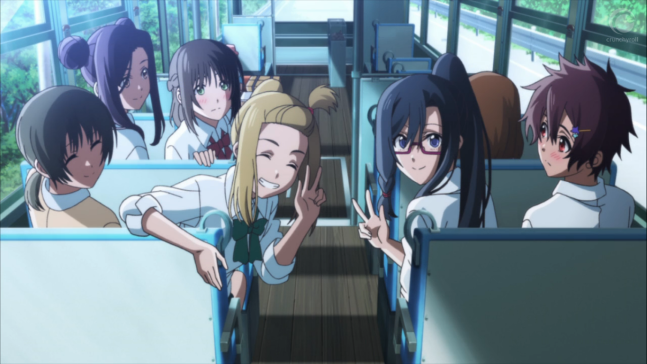 Alexie the Great makes a claim that HANEBADO! is NOT a sports anime!!!!

Yep, it’s true. I don’t think HANEBADO! is supposed to be viewed as a sports anime, but rather as an interaction between characters with badminton as a backdrop. Does that sound odd? Yes, it does; however, the main focus of the seven episodes we’ve been given so far isn’t even on the badminton to be honest. Sure, they play the sport, but the interactions and growth of the characters has been the main focus of our show.

We get these moments in episode 5 that can show how the episode isn’t about the sport, but about how two characters act and react to specific conversations that are brought up. We get a main character whose mental state is put into question after seeming to be very peppy and lovable(?) in the previous episodes. We get a backstory on a character we’ve just met that shows how she feels about a specific character (Uchika, Hanesaki’s mom).

This feeling plays into the psyches of Hanesaki and Connie, and that is the main focus of the episode… 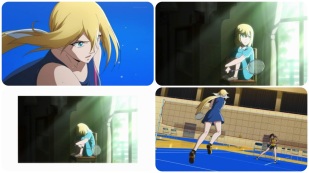 Episode six? That dove into my favorite character–the amazingly loving, caring, and beautiful Riko! What’s her drive? What’s she got going for her to play badminton? She’s got a support system, she’s got a best friend in Aragaki, and she’s got a family that loves her and wants her to do her best. And throughout this episode we get immense character development out of Riko, with moments like this: 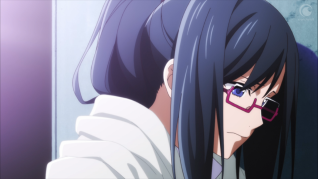 Am I tearing up just thinking about this episode and seeing these pictures? Yes, yes I am–but the fact that our main focus was on how Riko’s personality played into how she was going to try to win, we can see that the episode was more about bringing out the drive, passion, and humanity of Riko more so than it was about actually playing badminton. The badminton was just a conduit for Riko’s character to grow and for us to understand her relationship with Aragaki and how close they truly are to each other.

Episode four? I think this pictures says it all

The fact that episodes 3 and 4 of HANEBADO! focused on Connie and Hanesaki, their first interactions and how they were nice to each other, Connie wondering why Hanesaki was “putting on an act” and their subsequent badminton match really puts into perspective that the main focus wasn’t on the badminton, but rather how Connie and Hanesaki were going to play off each other as characters throughout the remainder of the season, or remainder of the episodes, etc…

There is so much about HANEBADO! that is breaking through while we’re continually given badminton matches and tournaments. I’m truly happy I continued with this show. If I go back, I remember the title of my episode 1 review was: “What did I watch this for?” Well, I guess I can now say that I am watching HANEBADO! not for the badminton, but for the formation of relationships within the cast and how the characters play off one another in terms of personality, ambition, their pasts, and how close they’ve been to each other.

HANEBADO! is not about badminton; HANEBADO! is a show about relationships, it’s about past trauma that characters are dealing with, and it’s about personal growth despite what may have happened in the past.

That’s all from me!

8 thoughts on “Opinion: HANEBADO! is NOT a sports anime!!”