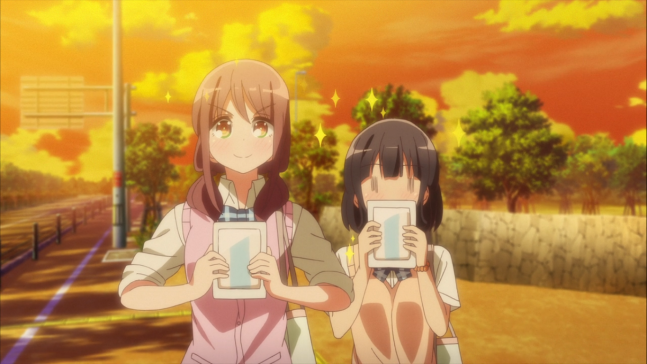 So, Harukana Receive gave us another great episode in my opinion. Why is that? Well, we almost had a volleyball exclusive!! Yes! Episode six had a ton of volleyball in it, which I actually enjoyed! However, let’s sort of skip through that quickly. I’ll point a few things out, but the main points I want to address in this episode come after their match against Ai and Mai 🙂

Okay, well, sort of. The timing was a slight issue for Haruka during the match, but eventually she was able to get it down. After some close calls, a few touches on Ai and Mai’s attacks, Haruka was able to get a clean block during the match! Hurray, Haruka!! You’re getting better the more you play! I like this aspect, though because it shows that Haruka isn’t a prodigy, she’s not some goddess player who can just pick things up and be amazing as soon as she starts. This, I think, is building on what we learned in episode 4, where I was officially hooked because of a single high-five, but yeah. It’s nice to see that Haruka is steadily progressing and not amazing at what she’s learned thus far.

Okay, here’s where things got interesting for me… Kanata was continually using pokeys…which in all honesty seemed very odd to me. She was still doing it, even though Ai and Mai were picking them up every single time she did it.

But!! What if she was planning that? What if Kanata’s motive for only using pokeys was to get Ai and Mai to run around in the sand as often as possible? For them to chase the “easy” attacks, the attacks that were supposedly not working, and to capitalize on that? Well, it turns out that’s exactly what Kanata was doing.

And I love that. Kanata knows that she’s not very tall so going for a strong spike isn’t going to be very beneficial for her and Haruka. So what does she do? She wears her opponents down. She makes Mai run around the court over and over again while she seemingly doesn’t exert much energy herself. (This is untrue, considering they’re playing a full-on match, but she wasn’t as worn down as Ai and Mai.) 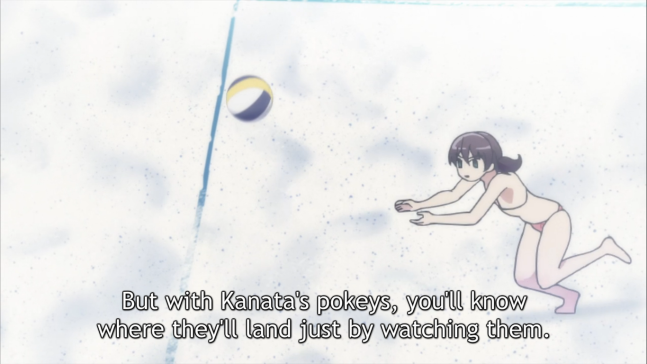 Well…what do we have here? Harukana won!! They actually ended up winning their match against Ai and Mai! Hurray for Team Harukana!! This is awesome! While we got some insight into Kanata’s strategy, and we actually got a wonderful block from Haruka during this match (I’m not including it, sorry), I think that most of this episode was just showing us the match without any other motive. That’s all it was. Until, well, the match ended. (See below) Yes you did!! Hurray!! However, Team Harukana only wins one match during the tournament, so that’s a little upsetting, but it also sets the stage for their drive to compete in the future. I like this, and I think the episode actually did a good job in skipping over the rest of a tournament when we could have figured the Thomas twins would win the entire thing to begin with… 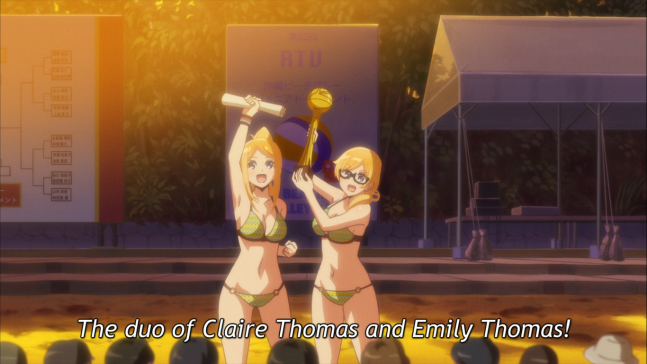 The Valkyrie Cup!! Emily and Claire talk about Nationals, and how Haruka and Kanata can attempt to go for the tournament. During this, we get what we know about our characters: 1) Haruka is pumped up and ready to take on the world. 2) Kanata is more grounded and realistic in her expectations of how well Haruka and Kanata will actually do as an official pair. I do like how their personalities can conflict like this because instead of being awkward they actually balance each other out and make for a genuinely fun viewing experience. Go Harukana!! 🙂

Narumi get messages from one of the Thomas twins, though, which I enjoy because it keeps the characters we’ve known throughout the show relevant. The two pairs (Emily/Claire and Narumi/Ayasa) seem to be rooting for Harukana with a lot of passion. What I like about this is that they’ve grown supportive of each other and are happy with how things have turned out. Back in the beginning episodes Narumi was super upset with Kanata for leaving volleyball behind, so she paired with Ayasa, but now it seems that Narumi is so excited and happy for Kanata and Haruka that everything she cried about and wished for has disappeared.

Perhaps I’m forgetting, but maybe Narumi just wanted Kanata to be happy again, and since she’s found some semblance of happiness Narumi can be happy, too. It’s all very wonderful I think and it shows that the episodes have built on one another, the characters have progressed, and we’re actually getting plot and character interactions that mean something instead of just a jumble of randomness.

Okay, while we get our loving Narumi happiness we also get some odd interaction between Claire and her mom. I think this is actually a good thing, though. Claire calls her mom and the questions Claire gets are about allowance and that sort of thing, but really we have no idea what the phone call is about.

Claire asks her mom for a favor, and that’s about it. It’s an odd sequence to be honest, but it put a question in my head and that’s what I like about it. Harukana Receive is making us think and letting the viewers wonder what could have been talked about, what could have been so important to call her mom during a practice, and what is going to happen next with Ms. Thomas…

And then we get the most wonderfully amazing thing. We get study time! WITH KAMEKICHI THE TURTLE!!!

Y’all have no idea how freaking happy I was that Kamekichi ended up being used in this episode. He’s so freaking adorable I can hardly take it. Haruka is learning signals with Kanata, and Kanata is the one quizzing Haruka during the scenes we get (I assume Kanata already studied them a bit).

So, we get Haruka struggling to answer while grandma lays food on the table. She tells Haruka that there’s going to be no food until she can answer Kanata’s question (which is the signal she’s using).

And then we get this wonderfully cute and amazing sequence of events:

After Kamekichi wipes the floor with Haruka during her study period we actually get classic Haruka!! It’s great to see that even with a comedic tone and different art style, the characters are still what we’ve known them to be. Haruka calls Kanata a Demon Coach!!!

Overall I think this episode did a good job in reinforcing what we’ve come to learn about our characters, and making them shine with what they’ve practiced. Haruka practiced blocking while trying to keep it a secret, which ended in an amazing high five moment, Kanata practiced pokeys often and used them to Harukana’s advantage against Ai and Mai, making Mai run like wild across the court and tiring her out so they could capitalize on the exhaustion, and then we got their classic personalities–Haruka’s overly excited nature and Kanata’s calm, realistic views.

Episode six of Harukana Receive may have been focused on the volleyball match, but it didn’t leave out much of anything we’ve come to learn thus far in regards to our characters–and that, I think, is a wonderful thing. It added a new goal for Team Harukana, and it showed that there could be a match brewing for Team Thomas and Team Harukana in the Valkyrie Cup!

We got happiness out of Narumi and Ayasa, which is something that was built upon in the earlier episodes, and I think making sure these two stay relevant is a good thing, considering we’ve just found out about the national tournament and they’re from Tokyo and not Okinawa. So, maybe we’ll get to see more matches with Narumi and Ayasa? Who knows!!

Oh, and uh…we got some weird lady watching, too. Is she going to be a coach? I honestly think she’s going to be a coach, but we know nothing about her and she hasn’t really spoken, so she’s basically shrouded in mystery. Still, though, there’s not enough emphasis on her character to make me care about her yet, so whatever.

That’s all from me on this episode! I thought it was a good one! But that might be because of the….

One more thing for Cactus Matt….because I’ve read all those reviews you do with Irina and you seem to like the fan service 🙂 (but really who doesn’t??)