So since I’m a week behind, this post will cover episodes 4 and 5 of How Not to Summon a Demon Lord! And, just so you’re all aware, all of the review posts I’ll be putting out in the next day will cover the two episodes that I’ve yet to review–which means a total of eight episode reviews! Well, technically four posts, but yeah. 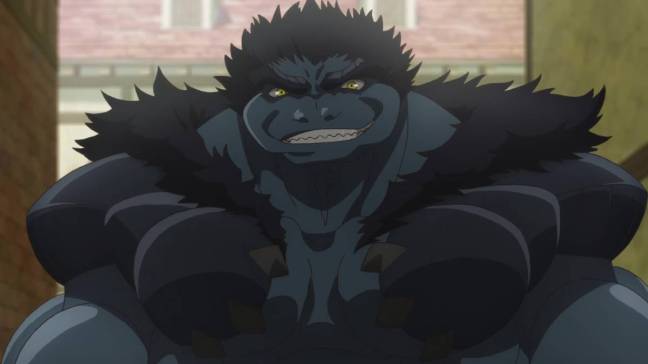 Demon Lord episode 4 was full of fighting. That’s really what we got out of the entire episode in my honest opinion. From the start we’re given that brawny Fallen Galluk/Gregore guy trapping Rem and Celes in an alley. What we get is information about the Fallen’s plan, and a character development for Gregore.

Gregore basically took the MMORPG multi-class feature and is a brawler/sorcerer. Cool! He can use magic! Well, we cut scene to Diablo on the bridge…I’ll make this quick…

Diablo is fighting Edelgard. Edelgard is getting worn out because she’s not as strong as Diablo. Edelgard uses a technique called Sacrificial Charge–this takes her life force away and uses it for a powerful attack. Diablo lets it hit him and brushes it off (sort of).

News of Gregore comes to the bridge and Diablo. Edelgard smiles wickedly…

Diablo gets fed up with dealing with Edelgard and the potential threat of the army, so he uses Grand Magic to end the fight. He needs to save Rem!!

So, Diablo uses a huge spell, but somehow Edelgard survives. Cut to him teleporting to save Rem. He’s pissed off. Like super pissed off…

The fight between Diablo and Galluk/Gregore ends very quickly with Diablo taking Gregore’s attack and using it against him, then sucking him into a wormhole type thing where Gregore won’t be able to harm anyone ever again. So powerful!!!

We end the episode learning that Shera is to be turned over to the Elves, and Diablo needs to prevent a war from breaking out! AHH!!! Overall the plot actually goes somewhere with this and I think it’s a good set-up for what could happen down the road with the Fallen making moves and the inter-species relations of the show.

Episode five begins seconds after episode four ends. Diablo and company learning about the Elven Kingdom wanting Shera. Well, here we get plot development (the discussion about potential war, politicking) and we also see Diablo freak out internally. We also learn that Shera has a bounty on her head–placed by none other than her own brother.

We get his freak out and then we get this:

Well, with that news, Diablo, Shera, and Rem go to gather information, which takes them to the lord of Faltra’s place…his name is Galford.

Diablo, having already freaked out about having to prevent a war, realizes he’s got no communication skills, either. So yet again, we see him freak out. I love how the plot is making character progression and character deepening realistic. Diablo knows he’s bad at communicating, but regardless he knows that if he wants to keep Shera and Rem safe he’s going to need to communicate in some way. Only this time, he’s way out of his league.

Diablo has trouble balancing his demon lord mode with his humble mode, and actually seems to screw up the negotiations with the Faltra lord, but regardless, Galford doesn’t seem to care much. It’s here that we’re introduced to Alicia.

Alicia–an imperial knight from the capital. She has very high communication skills, which balances the party out well considering Diablo’s failure to communicate, Rem’s awkward shyness, and Shera’s over-the-top attitude. I like how the “harem” is becoming more rounded here and the fact that we’re getting characters with all different personalities dealing with a specific issue and seeing how it will play out.

Now, the episode progresses with them realizing they need supplies if they’re going to go on a quest, so that’s what they go for. While heading to get supplies, though, Shera is taken by bounty hunters. Oh no!!

Well, at least the plot is moving along nicely. I like this in all honesty. A bounty was placed on her head and people are actually trying to collect on it. While I didn’t expect that plot point to develop so quickly, it was nice with the addition of another character.

We also get Diablo turning into a badass because of it. Plot drives the characters and the characters drive the plot. Diablo gets pissed and chases the bounty hunters. He’s. So. Fast.

Once the bounty hunters are caught, by our dude Emile actually, we get dialogue between him and Diablo, and we also get some talk between Diablo and our newest member Alicia. Alicia’s character is thrown into the open and we see that she believes she failed her assignment–she’s insanely tough on herself. I enjoy this sort of characterization because it also falls in line with her occupation within the world and what we could have expected from her.

Overall, How Not to Summon a Demon Lord episodes 4 & 5 were actually enjoyable to watch, more gripping than the earlier episodes, and showed us that the stakes are rising for Diablo and his party–especially Shera as of late. While we’ve strayed away from Rem’s story for now, I do believe that there’s going to be something brought up in the next episode considering the Fallen army was defeated.

Our multiple story-lines are intriguing and I’m actually excited to see what Diablo can pull out of his bag of tricks next time.

3 thoughts on “How Not to Summon a Demon Lord–Episodes 4+5 Review: Trouble in the Walls and an Impossible Mission?”